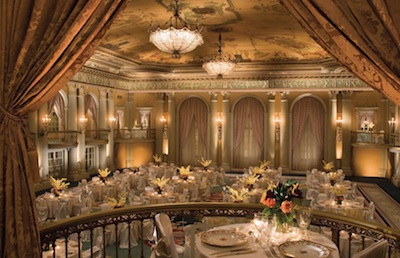 
At its opening in 1923, the Biltmore Hotel was the largest U.S. hotel west of Chicago and by 1969 was designated a Historic Cultural Landmark by the City of Los Angeles. It was designed in a Spanish-Italian Renaissance style with Beaux Arts influence, meant as a throwback to the Castilian heritage of Los Angeles.

The Crystal Ballroom's ceiling was hand painted in 1922 by Italian artist Giovanni Smeraldi, known for his work in the Vatican and the White House. Smeraldi and his team famously painted the ballroom's colorful, seamless fresco over a period of 7 months, decorating it with figures of Greek and Roman gods, angels, cupids and other mythological creatures. It was meticulously restored in the 1980s by Smeraldi's apprentice, Anthony Heinsbergen. The imported Austrian crystal chandeliers that adorn it are 12 feet in diameter. The Academy of Motion Picture Arts & Sciences was founded at a luncheon banquet in this room in May 1927, where legend has it that the original sketch of the Oscar statuette was drawn on a Biltmore napkin. It was also in this room that John F. Kennedy and Lyndon B. Johnson held their press conferences during the Democratic National Convention in 1960 which nominated them. 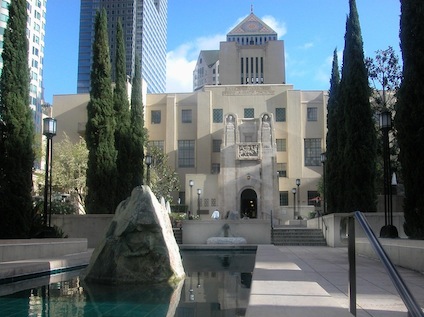 The Central Library is the third largest public library in the United States in terms of book and periodical holdings. It was built by Bertram Grosvenor Goodhue in a style that mixed Byzantine, Egyptian, modern, and Spanish themes, and opened in 1926. Most of the terra-cotta bas-reliefs were done by Lee Oskar Lawrie, and entitled "Meaning and Purpose of Library." The Library is open until 8 pm and is worth a visit for the architecture and art, and for the two exhibits currently on display: "The World of William Joyce," first floor; "Treasures of Los Angeles," second floor.

The NAACL HLT banquet will be held in the Maguire Gardens in front of the Library. The sculptural installation here is Spine by Jud Fine (1993). The four sections of steps present eighty selections from different approaches to written communication. The first section contains archaic scripts (the first step is blank indicating the unfathomable past); the second, the emergence of writing; the third, the growth of print and graphic reproduction; the fourth, the post-literate period (the last step is blank indicating the unknown future).

Entertainment will be provided by Mora's Modern Swingtet, founded by pianist Dean Mora and based in Los Angeles. Their repertoire is that of the famous small groups of the 1930s and 1940s, such as Tommy Dorsey's Clambake Seven, Artie Shaw's Gramercy Five, the Ellingtonians, and the John Kirby Orchestra, among others. They perform using period arrangements and transcriptions from the original recordings with a keen eye towards authenticity, both in terms of musical performance, as well as the appearance of its musicians. Their first CD, 20th Century Closet, was released in 2004 to critical acclaim.